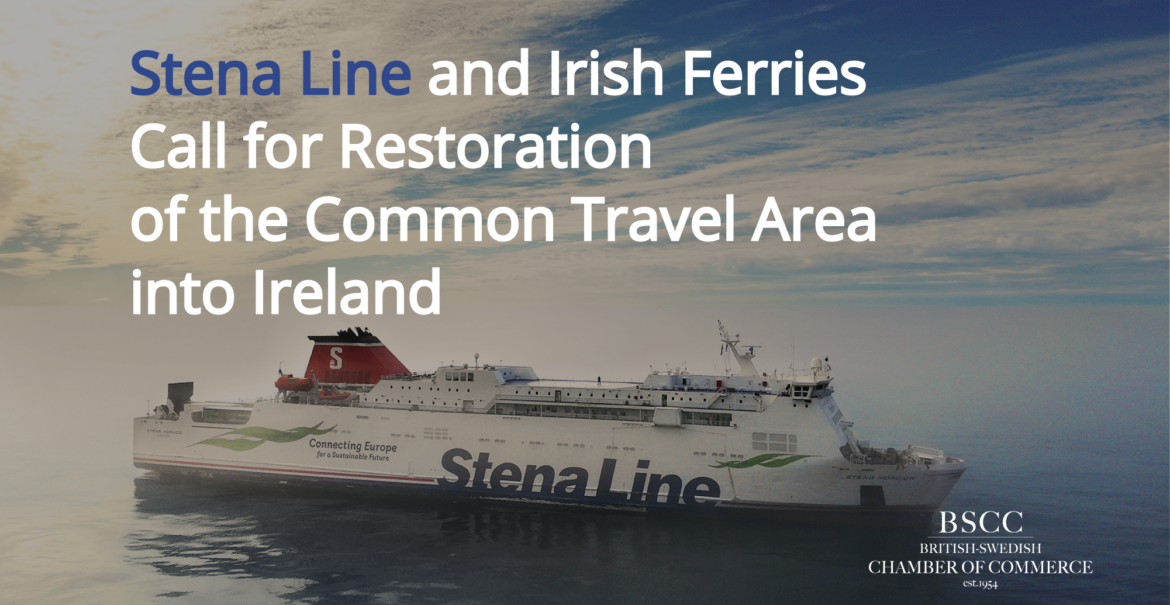 Ireland’s two largest ferry operators, Irish Ferries and Stena Line, a BSCC Patron Member, this month called for the reopening of the Common Travel Area (CTA) at the earliest opportunity. They also welcomed the proposal by Ireland’s deputy head of government, Varadkar, discussing the possibility of restoring the Common Travel Area (CTA) between Ireland and Britain as an “initial first step” for the travel and tourism sectors.

With the virus at low levels in both Ireland and the UK, and vaccination programmes progressing in both countries, Irish Ferries and Stena Line have called on Ministers and industry stakeholders to urgently look at restoring the long-standing CTA agreement for Irish and UK citizens, and permit unrestricted travel between Britain and the island of Ireland.

Paul Grant, Trade Director for the Irish Sea, at Stena Line said: “COVID-19 infections are now at low levels and vaccination levels are increasing significantly in both countries. In the UK for example 66% of adults have now received their first dose and 30% have had both, so there is now a real need to focus on solving some of the economic impacts of the pandemic, and an obvious starting point are the hard-hit tourist, hospitality and travel sectors. With the restoring of travel between the islands of Ireland and Britain, we can start to rebuild these sectors locally in advance of the full resumption of international travel, which may take more time to agree and deliver.”

Andrew Sheen, Managing Director for Irish Ferries commented: “The ferry industry has played a key role in helping to keep vital food and medical supply lines open during the height of the pandemic.  With the current UK infection rate of 48 cases per 100,000 population comparable to the lowest in Europe, we need to acknowledge the shared land border between the Republic of Ireland and Northern Ireland and eliminate the discrepancies and loopholes on travel restrictions on the island. Irish Ferries and Stena Line welcome the Tánaiste’s recent comments on the possibility of restoring the CTA in advance of the full resumption of international travel and would urge the Irish Government to prioritise its implementation.”

The issue with the CTA has arisen due to differing approaches by the Irish and UK governments. The Irish Government requires passengers from Britain to have a negative PCR test and they must also quarantine for 14 days on arrival. Whereas, the UK Government has never imposed requirements for testing or quarantine for people travelling from anywhere on the island of Ireland to Britain. Thirdly, the Northern Ireland Assembly also has never imposed testing or quarantine on anyone travelling from Britain.

Irish Ferries and Stena Line have also stressed the necessity for time to prepare for the resumption of travel. For now, it appears that the industry will need further clarity on future dates in order to ensure safe preparations can be made before full operational capacities can be restored.