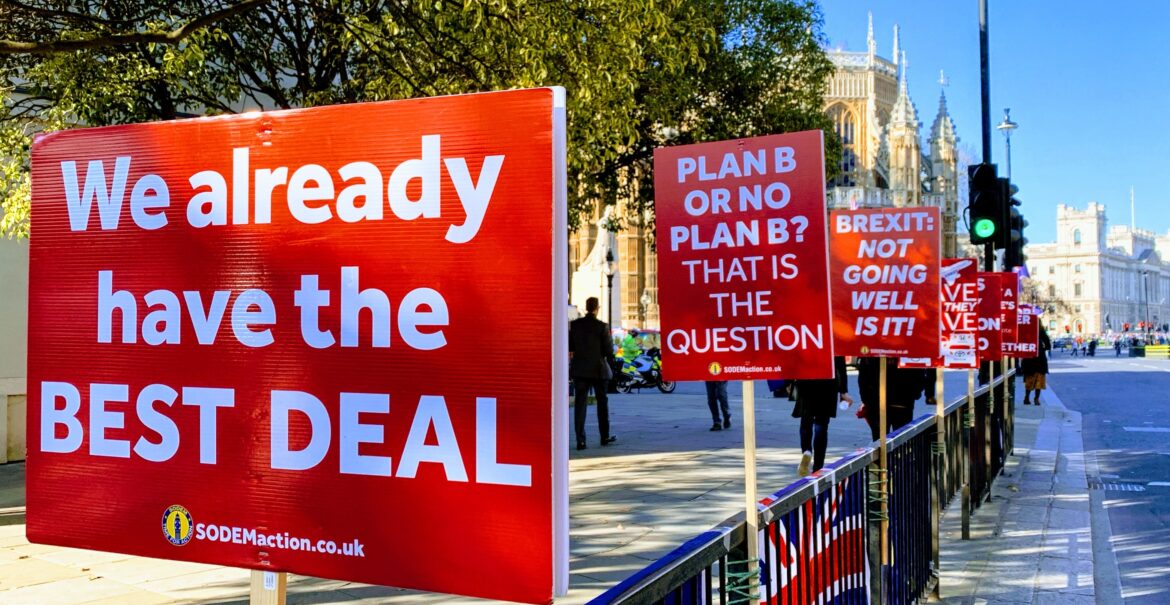 Following the EU referendum on 23 June 2016, the UK voted to leave the EU. The impact of UK leaving the EU is likely to have large potential economic impacts, both in the short and long run. The EU is UK’s largest trading partner and the British service sector is the largest sector in the UK, dominating London’s economy. The Brexit effect on the euro area, the British economy and overall economic growth is still relatively unknown and will depend on the nature of the final agreement.

A no-deal Brexit is a risk to the financial stability to the overall euro area, as noted by ECB’s Financial Stability Review in May 2019. The EU is the UK’s largest trading partner, accounting for more than 46% of exports equivalent of 289 billion GBP and 54% of imports equivalent to 345 billion GBP.[1] Ireland is the largest single EU country for which UK has a trade surplus, the remaining three is Sweden, Malta and Luxembourg.[2] Petroleum and petroleum products, road vehicles, medicinal and pharmaceutical products account for more than 50% of UK’s total exports in goods. Road vehicles, medicinal and pharmaceutical products also account for the largest percentage of total goods imports. Financial Services together with other business services including legal, accounting, advertising, research and development, architectural, engineering and other professional services make up just over half of all UK service exports to the EU.

Travel Services is the UK’s largest import service accounting for more than 40% of total service imports from the EU. A British tourist visiting an EU country using services provided such as hotels and restaurants in that member state counts as a British service import.[3] An ending of freedom of movement for EU citizens immediately after a no-deal Brexit could therefor severely hurt the British economy by cutting British service imports. The UK government has said EU free movement rules will end immediately if there is a no-deal Brexit the 31 October. UK trade in services with the EU has driven growth in the UK with Europe as a major destination for UK services exports.

The Withdrawal agreement, negotiated by former PM Theresa May, offers temporary guarantees for UK citizens in EU countries, but the EU cannot give any guarantees in the case of a no-deal Brexit as it would be up to the individual EU member states.

The British Chambers of Commerce, BCC has published a survey on how British companies are preparing for Brexit and the real-world questions businesses face. The BCC International Trade Survey found differences in attitudes between internationally active firms and UK only firms. Internationally active firms reported they found Brexit, higher tariffs, exchange rate volatility, lack of free trade agreements as the top perceived barriers to trade. More generally the report showed that there is a low level of awareness about key development in international trade among UK firms. The effects of Brexit are expected to be felt the most in terms of access to the EU market and access to EU labour.

The British Government wants an agreement but is prepared to leave without one. Britains new relationship with the European Union will have both national and global implications. The ongoing withdrawal negotiations will determine the future relationship between the UK and the EU. An Association Agreement would make the UK a third country and creates a framework for close economic and political co-operation between the EU and the UK. This type of agreement can be very broad and varied but it’s not clear if the British Government would find this acceptable. A Deep and Comprehensive Free Trade Area has also been suggested as a solution that would give the UK access to the EU:s single market. The future relationship is likely to be based on some combination of an AA and DCFTA. The British Government will want to negotiate a future relations agreement with the EU but how this agreement will affect the economy and different sectors is yet to be seen.

For more information about the latest developments concerning Brexit visit gov.uk and parliament.uk

The puzzle of how many Brits abroad there really are – BBC

Brexit: How would a no-deal affect UK citizens in the EU – BBC