New data shows the UK economy contracted by 2.6% in November as England was placed into a second lockdown. This was the first monthly fall since April and meant that GDP was 8.5% below the pre-pandemic peak. The ONS has attributed the decline to the widespread damage experienced in services which was led by hospitality, wholesale, retail, arts and the auto sector.

The economy did, however, perform far better during the month than most economists had expected. One of the three core reasons for this was due to more of the economy staying open during the 2nd lockdown (unlike the present 3rd lockdown) and this meant pubs, schools and construction remained open for large swathes of England. The second reason was due to the immediate financial benefits of customers stockpiling- by around 55% of the public. Plus, manufacturers benefited from their best month in almost three years to mitigate against disruption in the event of a no-deal. Finally, the UK economy is comfortably remaining afloat due to the built up ‘COVID-resilience’ achieved through businesses adapting to new online/click&collect solutions.

On Friday, the UK Government temporarily suspended all travel corridors into the country with no end date in sight. All international arrivals (including British citizens) are required to take a pre-departure test and self-isolate for 10 days. If any of these new rules are broken then a £500 fine can be applied to each person. The Transport Secretary, Shapps, introduced these plants to prevent new COVID variants from South Africa and Denmark arriving into the UK.

COVID cases in the UK have now exceeded 3.4m with over 90,000 related deaths. Throughout December cases in the UK surged due to a more infectious mutation which originated in the South East of England. However, this is now in reverse and daily infection rates are tumbling quickly from a peak of around 60,000 (per day) on the 9th of January to around 40,000 today. This good news comes as the Health Secretary, Hancock, revealed over 50% of over those aged over 80 had been vaccinated and that over 4m people, nationally, had received their first vaccine.

The UK Budget, prepared by the Chancellor (Sunak), is set to be published on the 3rd of March and the British media has already been circulating rumours of potential changes set to be introduced. Due to the Government borrowing a record £284.7bn between April to November to cover the costs of COVID a restructuring is inevitable. However, the Government has committed to avoiding the austerity measures seen at the end of the 2009 Recession which would have helped reduce the deficit immediately. The Chancellor is instead believed to be considering raising taxes on National Insurance, capital gains and fuel duty– whilst reducing pension tax relief measures.

The upcoming G7 summit in Cornwall, in the South West of England, will take place between the 11th and 13th of June and is set to be Mr. Biden’s first presidential trip outside of North America. The event will bring an estimated £50m into the local seaside economy and will be another boost for Britain’s growing domestic holiday market. In November the UK will also be hosting the UN Climate Change Conference (COP26) in Glasgow. 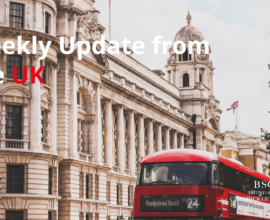